Move Over Marimar, Here Comes Fatima: Why Falcones’s Monolith of a Book is better Than Your Average Soap Opera

I will never ever forget the day I finished reading Ildefonso Falcones’s novel “The Hand of Fatima”. I was literally in tears. I know it’s kind of sissy and stupid, but I just can’t help it! It was really moving. Reading it made me realize that such experience is like watching a Spanish soap-opera, only better. 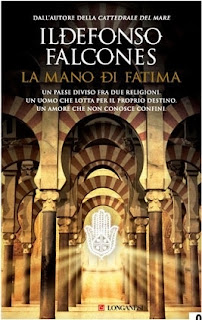 So what makes the reading experience better than watching the usual Spanish or Korean telenovela?

1.      The leading lady is not a crummy stupid gal who dances on the beach with a talking dog, but a woman with a strong fighting spirit. She’s not just a girl. She’s a complete woman.
2.      Historical references of the Muslim revolt against the Spanish crown in the 16th century are interesting. Not the usual dry and dense historical boredom I experienced when I read Umberto Eco’s “Il Cimitero di Praga”. I wanted to die when I came to page 110. Anyway, it is guaranteed that you’ll be smarter by the end of the story, unlike telenovelas which leaves you, not only breathless but also brainless.
3.      The characters are “real” people with ideals, noble dreams, and ambitions. In a world dominated by “reality” shows, conditioned by the suggestive powers of the lens, people have the tendency to exaggerate their own idiocy, totally exterminating the remaining intelligence of humanity. Hernando and Fatima, despite the dramatic tones of their personalities, remind readers of what we used to be before the commercialized pop-modern trend Big Brother came into existence.
4.      It possesses the melodramatic elements of a soap opera, and even better. You can feel the intense emotions, the drama of each character, the power of the author which allows you to delve into the very souls of each protagonist in the story. You feel the heaviness of despair when Hernando and Fatima have to deal as they fight for their love and for their faith.
5.      It deals with real religious issues. It’s not the usual rags to riches story of individuals but the story of two religions, of people who experience the same thing in real life- the search for peace between two religions, the brotherhood of two different peoples.
6.      The love-making! My goodness, it really embarrasses me whenever I speak of it this way but the love-making scenes are simply evocative and passionate (but of course not in a pornographic way). You don’t get that in telenovela. Hah! And no, THIS IS NOT AN EROTICA.
7.      It’s a perfect book to read if you’re travelling in , especially in . The story will seem very alive to you.
8.      Though it has the elements of a soap opera, the novel is not always predictable, especially in the ending.
9.      What’s appealing about the novel is the moral lesson that one can learn from it. It would appeal so much to people like us who are still trying to keep our faith alive in a country that aims to put us down, to stand tall and stand strong in the face of the repressive eye of a hypocritical society.
10.  Those 900 pages seem heavy but I can assure you that you’ll breeze through it. The story is so beautiful you don’t want to stop.