Do you hear the people sing?
Singing the song of angry men? 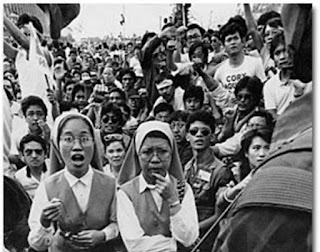 It is the music of a people
Who will not be slaves again!
When the beating of your heart
Echoes the beating of the drums
There is a life about to start
When tomorrow comes!

- from the musical "Les Miserables"


The shadows of our dark past are back, lingering in the treacherous halls of power
and glory where valiant men and heroes once tread, and they're feeding on our
indifference, on our deliberate ignorance, and hypocrisy.

Now the once glorious days are turning grey,
the Parasites are bloated,
the people are lost in dementia and deprivation.
The poor calls on the names of mere men who reek of deceit and malice.
The youth are living in the barren lands of frivolity, entertainment,
clinging on the icons of half-breed harlots and foreign princes.
The 110 fools are poised to establish their petty little realms.

The Whore, the Abominable Lady from the ashes, is rejuvenated, hailed as queen
and blessed by our own people, as they spit on the tombs of our martyrs
and heroes, and Her spawn and sycophants bask in the graces of the Lord of the Land.
The usurpers have grown in glory, strength, and power.
They shine ever more in their coats of gold and silver, casting veils of shadows all
over the earth, and skies, and waters.

And you smell not the decaying soil.
You hear not the rumors and moans of the souls who wrestle underneath.
You taste not the bitterness of terror and falsehoods.
You feel not the numbing cold of betrayal.
You see not the deep blackness of the shadows.

27 winters have passed. It's still cold. Our battle song of then is still our battle
song today. Some have faltered. Some chose to forget.

But there are some who still sing the song of our fathers. Do you hear them sing?
And they will sing lest we forget.
Posted by Mr. Tripster at Monday, February 25, 2013 11 comments: Links to this post

Imagine, kung tayo pa you’d still be someone who’s been waiting for me to pop out the big question for four years, and counting. 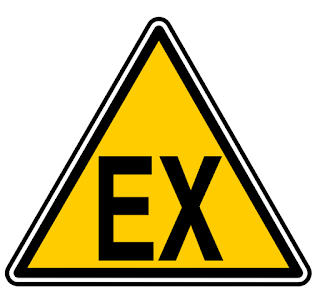 I still cherish the good times we had and the songs that we shared. I still remember the bad times and learn from it, because I want to be a better person.

Leaving you made me one of the worst assholes in this planet. I’ve never given you a full account of what went in my head. But time will come when you will understand everything. God knows when.

Again, I was wrong to hurt you. I hope you’ve forgiven me for all the sufferings I caused you.

But now you’re getting married. Both of us have moved on with our lives. You’re marrying one of the best guys I know, since he’s also a friend of mine. And I think (and hope) we can be good friends despite our history.

Wishing you all the happiness in the world,

To the Lady Formerly Known as My Teenage Sweetheart

Akala ko M.U. na tayo. Hindi pala! Ako tuloy ang nag-iisang M.U.- mukhang ulol! Hahahaha! After that, I did say some things really terrible against you. I’m really sorry. I was angry. I was mad about you. Pero wala talaga eh. Ipinagpalit mo ako sa isang tall, dark and handsome (and now he happens to be my superior). Sino nga naman ang papatol sa katulad kong short, fat, and one with an overwhelmingly sexy personality?!

But I think it turned out well for the both of us. Friends and co-workers in the same church ministry. Salamat sa lahat ng support at sa pag-edit ng short story ko. Salamat at napatawad mo ang aking immaturity.

On my part, I wish you all the best and success in life. You’re beautiful, impressive and intelligent, and I’m saying this with all honesty. ‘Wag kang feeling. Hindi ako naghahabol, hahaha!

To My Childhood Crush 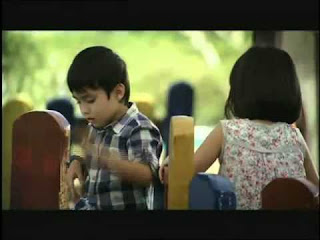 Email ThisBlogThis!Share to TwitterShare to FacebookShare to Pinterest
Labels: Relationships, The Brain Storm

I’ve really had enough of you. Is it me or is it you who’s making me hear Barbra Streisand and Sharon Cuneta sing inside my head every February every year, or is it my inner diva screaming inside me, struggling to get out?

Whatever the case is, I hate you and I have no desire of becoming a dancing drag queen diva.