What are pageants for, really? Is it important in promoting advocacies and forwarding other issues? Is it truly an element of goodwill that will make the world a better and brighter place to live in?

These are the questions that popped in my head as I gaze upon the handsome face of this young gentleman- those glittering deep eyes with brows that add to his beauty; those high cheekbones and distinct smile; his smooth brown skin, beefy arms, impressive chest, a flat stomach with some features of abdominal muscles. And let me just stop there, because I can’t go on fantasizing always about my cousin. I know. I am a pervert. But hey, he is still a quite distant cousin.

He’s got the look. But the brain? Well, the Q and A portion was the most awkward moment for him, having given an answer that has nothing to do with the question. Nevertheless, he was proclaimed one of the most handsome gentlemen of the country.  It just shows us that it’s not all about beauty and brain. Sometimes, it is only about beauty, and how many boners and exploding ovaries can a boy stir up in one night. But I’m still happy for him, for bringing much pride to the household.

So all of the competitors of this important pageant are presumably straight and, obviously, good-looking. But they all look so young. I wouldn’t call them men. They are more like boys- very young and at times, quite awkward-looking.

And then I saw Rappler’s coverage of Mr. Gay World Philippines 2016, and I saw the winner. He is hot as fuck! And I guess, smarter than the usual pageant boys. 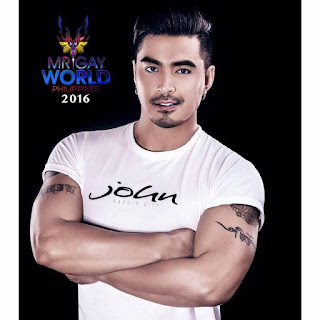 I was really amazed at the candidates of the gay pageant. I couldn’t help myself from comparing these straight boys to these gorgeous gay men.

The gays were more perked up, better projection, more muscular, and better-looking. The gay pageant boys look more mature and defined while the straight gentlemen were like still undergoing puberty. I think most of the candidates in the gay pageant are actually in their late 20’s or early 30’s. But then I’ve always preferred guys who are more mature in looks and personality. When it comes to intelligence, I really can’t say which group is smarter, because anyway, the gays have their fair share of dumbasses. Ok, I am really biased here, so I can’t say that our gays outdid those boys.

But let’s be realistic- we’re not judging intelligence, because otherwise there would be more physicists, professors, or scientists here, or an ogre, like me. And how do you judge beauty when it is not even quantifiable? Why can’t we ask ourselves why we are doing these pageants? Why are we so crazy about it?

I like these male pageants because there are handsome men. It makes me feel good to look at them. But to judge them on the basis of their beauty and their ability to answer one question? Am I missing something here?
Posted by Mr. Tripster at Wednesday, February 22, 2017 1 comment: Links to this post

The Things I Learned on My Journey in Finding Love

Four days from now and I’ll be having a dinner at a Japanese restaurant, together with my single friends, pathetically glorifying our singlehood in the best possible way, on Valentine’s Day. We’re quite a confident and brave group of unmarried individuals, each having a very unique singlehood- each has a different story to tell and a different philosophy and perspective on why he or she is still single.

My version is- I am still on a journey that is slowly unravelling as time goes by, and as I meet new people. Yes, I have considered the fact that I maybe a loser. Or maybe I am just ugly and fat. And perhaps it’s all of the above. But I am convinced of one thing, I’m still on that journey and I still have to reach my destination, in that place called love. Cheesy! Chos!

But through the years, I have found quite a few things that have changed my mind and my life so much.

On my journey, I found Infatuation. Back then, when I was younger, I was a boy. Or I thought I was a real boy. That was the time when I fell insanely attracted to a girl- tall, pretty, and smart. For a moment in my life, my strong conviction of being a flawless glittering gay queen was shaken when I met Ms. Infatuation. I breathed out a hallelujah, thinking that there might be a chance that I am just confused and that I am really straight.

Ms. Infatuation went away and it made me upset- first, because she left me, second because when I saw her new boyfriend, I wanted him for myself. My hopes of being probably straight stopped there actually.

Time went by and I learned what Truth really meant. In a community of faithful Christians who champion family values, and strong and lasting husband-wife relationship, it was impressed upon me that holy living in spirit and in truth requires me to find a suitable match; a suitable female (and I have to stress that) partner in life.

As a closet queen, I really don’t find it difficult to find a girl. I find it really absurd and funny that I like dating girls and find no difficulty to date a girl, but I can’t even make one step closer to a guy that I really like.

So I had a girlfriend. It was perfect. We have different character and personalities but we could work it out. Two years in a smooth relationship. Our families were absolutely in agreement and approve the match. The community of the holy and faithful uphold and approve the match. I was expected to propose any time soon. And then it hit me- I am going to build a life with this nice girl who loves me and is willing to sacrifice everything for me, and once I am married, in the eyes of God, I would be staying with her for the rest of my life until I die. I asked myself do I truly love her?

I realized that a life of holiness and truth doesn’t mean living the conventional life, a life that is generally approved by society. Marrying her would be approved by society, but it is a sham, a marriage for convenience, a travesty of truth and holy living. Above all, she doesn’t deserve to live a lie. I broke off our relationship, for her sake. She was devastated, but it was better that way than live a life with a husband who doesn’t really love her.

After that episode of dating girls or being in a relationship with humans with vaginas, I was finally convinced that I was gay. Not confused. Not bisexual. I am a screaming-queen, glittery, dick-sucking, insatiable bottom-bitch G-A-Y.

I realized that since I came out (which is not long ago), I wasn’t really serious about looking for a man, because of my First Love. I had to convince myself that it was a hopeless case, that he will never love me the way I madly loved him.

I can confidently say that I have moved on now. I still love him as a friend and brother (or sister). I still remember those feelings and the sleepless summer nights when I thought of him. But he is now just the man I used to love.

I am okay being single. My trouble is that I got so used to it that I might find being in a relationship too difficult or find living with another guy under one roof too fastidious. But there are moments that I wish I could share a delicious dessert with someone, or see pictures on the wall of me and my beloved, and maybe even with our three children. I don’t need random fucks. I don’t even like the idea of sleeping around. I would like to have a husband.

So here I am, hoping to find love. I don’t consider myself a hopeless romantic. But I believe in fairytales, and that fairytales do come true. And I am probably under the influence of some deadly chemical or something else.

Now, if you please excuse me, I need to make reservations for an odd number of loveless people.
Posted by Mr. Tripster at Thursday, February 09, 2017 No comments: Links to this post

Where Do Broken Goals Go?

Where do broken goals go? Lintek!
Posted by Mr. Tripster at Thursday, February 09, 2017 3 comments: Links to this post